There is a problem with BB/BF77 matching in the app. That’s because there’s a problem with the music files downloaded from the Les Mills site.  They play correctly but they do not have track numbers reflecting the order in which they should be played.  This is the first time in 800+ releases this has occurred.  Hopefully it will remain the only one.

The fix is at the bottom of the page.  But first I’d like to provide context for the problem.

BB/BF77 has two sets of data that have been generated from all those emails of your song data.  Both are shown below:

I’ve also added a picture of the tracklist according to the PDF release notes to make it obvious what’s happening.

There should be 13 separate music files in this release.  There are that number in one set of data I have received.  There appears to be a song missing from the other set of data (‘Youth’ by ’Troye Sivan’).  I’ll assume the first one is correct and that some people did not download all songs in the release.  But note that first column.  The trackId has the first number of ‘2’ to indicate it’s a BB/BF release.  The second three digits are the release number (‘077’ in this case).  The last two are the track number.  They are not sequential.  We are missing 2, 7, and 11.  That pushes the rest of them out into incorrect values as well.  So the app will not be able to find this release.

The quickest way to fix this is to change the metadata for the songs.  To do this requires your music to be in iTunes.  Find the affected BB/BF77 release and make sure you can see all the songs in the release.  For this example I’ll use an album in my iTunes library from a band who will probably never appear in a LM release.  Note that the track numbers are shown to the left of the songs.  Note that there are ten tracks overall but that the last has an unexpected track number.  (That’s how it appears when ripped from CD.  They put in a lot of one-second long silent tracks after track nine in order to get that magic number).

We want to ensure the last song has track number 10.  So click on that song to select it then choose the ‘Get Info’ menu item.  It’s now in the ‘Edit’ menu but may be in the ‘File’ menu in earlier versions of iTunes. 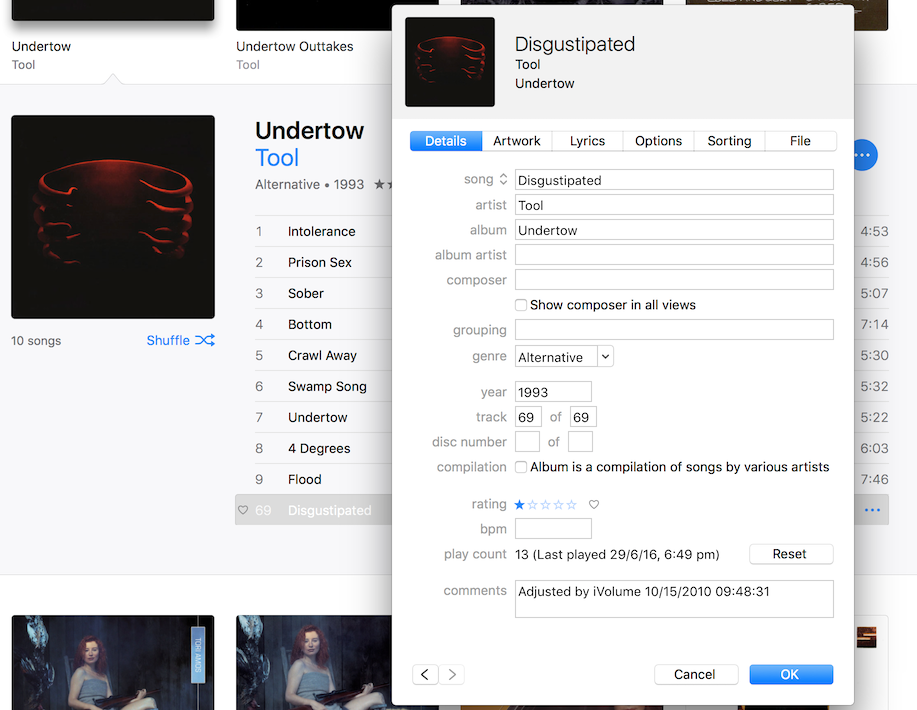 Change the value in the track field so that it is the desired number and hit the ‘OK’ button.  Repeat for each track that requires it.  You should end up with thirteen tracks sequentially numbered in your BB/BF77 album.